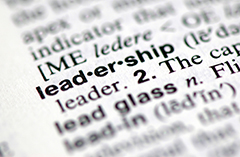 I have been involved in leadership for a lifetime and have developed what I call the Five C’s of Leadership.  If you can score yourself highly on these traits, you are well on your way to becoming the champion you desire to be.  Remember, you don’t become a champion when you win.  You win because YOU ARE a champion.

The Five C’s of Leadership:

#1 Character.  When I mention character, I am not referring to your moral code, but rather asking, Do you walk your talk?  Leaders are easy to follow when they ask you to do as they do, not do as they say.  When you as an individual start to follow through with things you think about, you are starting to walk your own talk.

#2. Courage.  Fear is one of the most effective tools our minds have to keep us from being all that we can be.  We have such an amazing ability to conjure up fears which become our best reasons not to attempt or follow through with something.  We give all the power and strength to that voice of fear, instead of to the wise part of our mind (the part that knows what to do if we would only trust it).  It’s important to understand that courage is not the lack of fear. Courage is taking action in spite of our fear.  Every time we feel the friction of fear we have two choices.  One, to address it and go into it.  Or two, to back away.  Going into it, taking it on builds our courage muscles.  Backing off only weakens us, and keeps us from the life we most want to live.

#3. Concentration.  Concentration is about focus.  I feel that most people have the ability to be great IF they FOCUS their energies on what they want and where they are going.  But most people lack the ability to focus and therefore don’t accomplish what they want or end up where they want to be.  Most of us can figure out what needs to be done to be champion.  They just don’t focus on that WHAT long enough or hard enough to get it done.

#4. Confidence.  Confidence deals with optimism.  It isn’t possible to be a champion without confidence.  Confidence is about being mentally tough, which means having the ability to be at your best on command.  Mental toughness is the ability to control one’s emotions.  Another twist on mental toughness is cognitive behavior therapy (CBT) — using the conscious mind to understand and overcome fear and self-destructive thoughts and habits.  Successful people can CBT themselves almost instantly. To be a champion, you need to catch yourself when you start to think negatively and refocus your thoughts in a positive direction.

#5. Capacity.  Capacity is about energy and energy is about life itself.  The more energy we have the better.  Vince Lombardi said, “Fatigue makes cowards of us all.”  When we start to get low on energy, we start to become cowards, and champions are not cowards.  The four energies we need to monitor are physical, emotional, mental, and spiritual.

So take these Five C’s of leadership and score yourself on a scale from 10 (on top of this trait/having command of it) to 1 (you need help).  A high score means you are on your way to becoming a champion or you are already there.    A low score does not mean give up  It simply shows you what you are going to have to do to get there.  As I said earlier, becoming a champion is tough, but the good news is YOU CAN BECOME ONE!

The Fifth Obstacle to Your "Unlived Life"

The final obstacle in the River of Resistance to our “Unlived Life,” at first glance doesn’t look [...]